A Photographer’s View: The Crossing of Divergent Paths

Georgio, Vista di Taormina:  In the 1880’s Taormina was a popular stop on the Grand Tour and later became a high-class resort for intellectuals, writers, royalty and movie stars. Today it remains a destination point for cruise ships and tourists. I went there for a month to study at a “total immersion” language school. I observed a pattern of life, a routine that I wanted to be part of, even for a brief time.  Each morning, I passed by a group of taxi drivers waiting for fares—and Georgio reading his newspaper.

Graziana, La Processione del Matrimonio:  Graziana was part of her sister’s wedding procession. It would have been molto maleducato (very rude) to ask her to stop and pose for a photo. Luckily, about an hour later she was waiting for a limousine…and willing to have her picture taken. Grazie mille Graziana.

Gaetano, Il Negozio di Scarpe: Corso Umberto is the main shopping street in Taormina. I asked the owner of a shoe store if he would step outside to have his portrait taken. He agreed, but at that moment a customer walked into his shop and I had to wait a long time…afterward, Gaetano and I goofed around taking selfies!

Gabriele, La Banda Musicale: The 1st of November is a national holiday in Italy, known as Tutti i Santi or Ognissanti, which celebrates all saints. I stepped in behind a civic marching band until it split up at the eastern end of Corso Umberto to find Gabriele still holding his trumpet and music book.

Beppino, Giovane Soldato: Scicli (sheek-ly) is a UNESCO-listed Baroque town in southeastern Sicily and is the film location for the popular Montalbano TV series. Beppino (a diminutive form of Giuseppe) shared a bit of his life’s story with me. The wrinkled photo shows him as a twenty-five-year-old soldier.  Proudly, he told me he has been married for fifty-eight years.

Giovanna e Michela: Giovanna is la moglie (wife) of Beppino.  The tender bond of friendship between Giovanna and her friend, Michela, creates an especially narrative photograph.

Elisa: Elisa was one of my teachers at the Centre for Italian Studies Babilonia in Taormina. Classes were held in an historic villa with a botanical garden filled with citrus trees and other exotic plants, where students and teachers could fare una piccola pausa caffè (take a little coffee break) … or have a smoke.

Fabrizio: I saw a group of teenagers hanging out on the steps of a municipal building in Noto—another town in southeastern Sicily. I wanted a picture of un adolescente, but I was nervous to approach them. Did they hate tutti i touristi? I shouldn’t have worried. Fabrizio volunteered to follow me to the shaded side of the building. All the time his buddies were heckling him with good-natured cheering.

Giovanna: Giovanna was standing in a doorway on a side street in Scicli. Using the “polite you”  I asked, Posso fare una foto di Lei? (May I take a picture of you?) After a little more chit-chat in Italian, she agreed, but first she said, Aspetta! Devo mettermi nei denti. (Wait! I have to put in my teeth.)

Mario: Before school, I drank un cappuccino at a popular pasticceria, Brasilrecca. I could see Mount Etna in the distance and watch i siciliani—mothers taking kids to the bus stop, workers on scooters going to work, crews cleaning the street, a truck delivering wood to restaurants and a couple walking their dog. This image of Mario is one of my favorite street portraits—a gruff Sicilian with a cigar… and a fluffy dog.

Maria: Near the cathedral of Taormina is the Piazza del Duomo. At the center of the square is a beautiful Baroque fountain…and una farmacia (a pharmacy) where I saw questa bella donna anziana (this beautiful elderly woman). Sicilians sometimes speak in dialect. With her daughter acting as translator, I got this photo of ninety-one-year-old Maria.

Roberto: Ortigia is the historical center of the city of Siracusa. It is a small island with a sea wall and boardwalk offering dramatic vistas of the Ionian Sea. Roberto held up his catch, un polpo still writhing on a hook.

Anna: Anna was waiting at a bus stop in Taormina. To my surprise, she agreed to let me take her picture. She might have said, Andare via! (Go away!) Preferring an image where my subject is not smiling, I sometimes ask for un atteggiamento poco (a little attitude). I didn’t have to ask Anna. 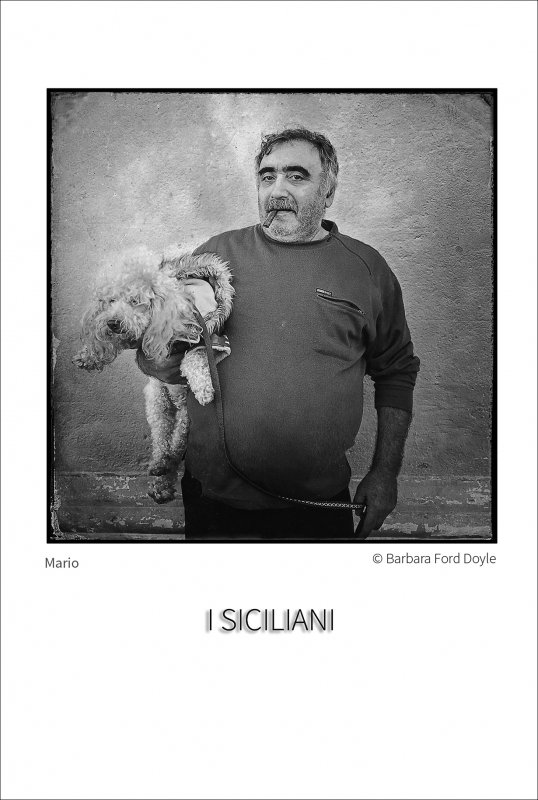 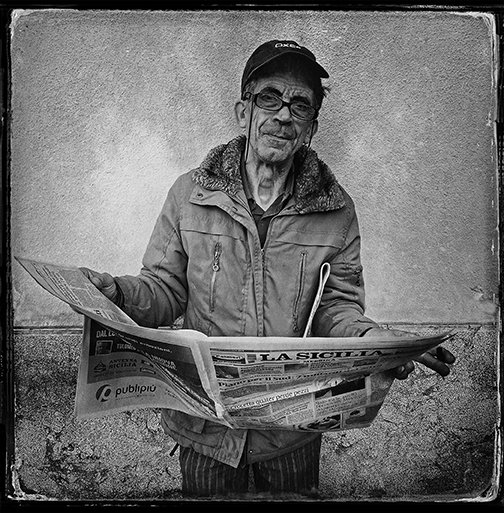 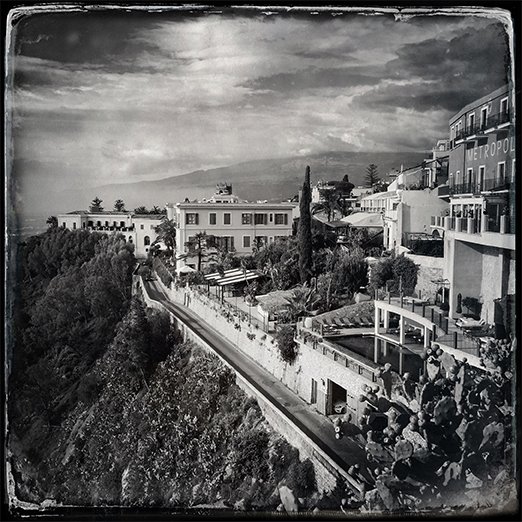 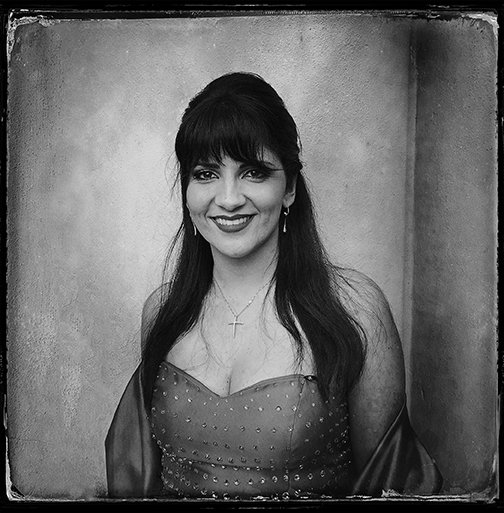 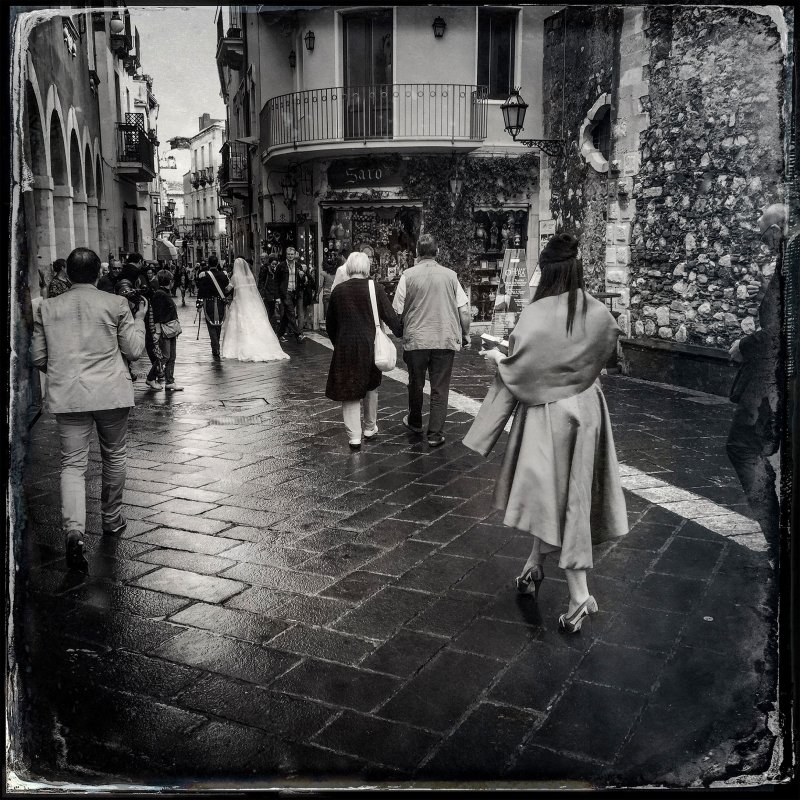 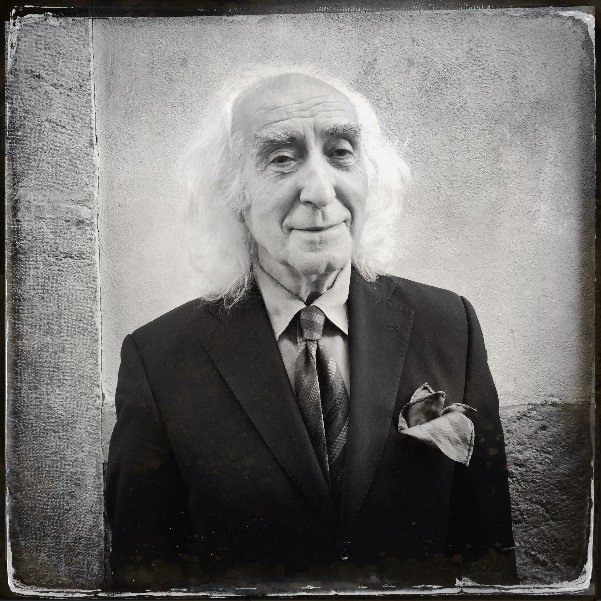 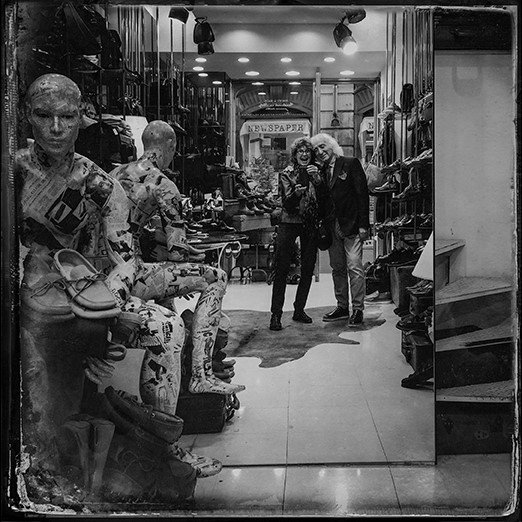 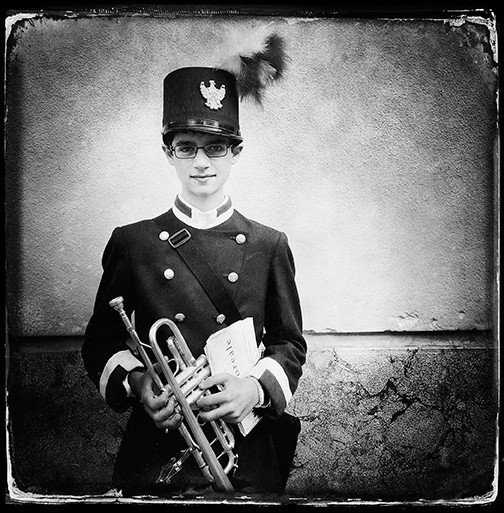 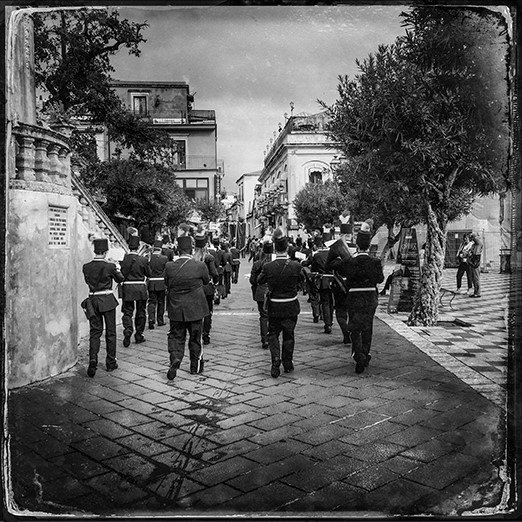 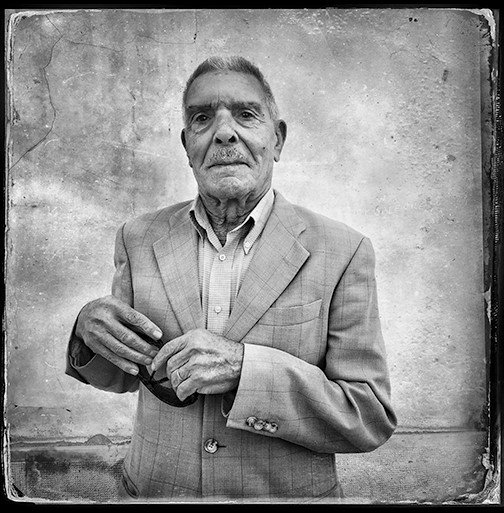 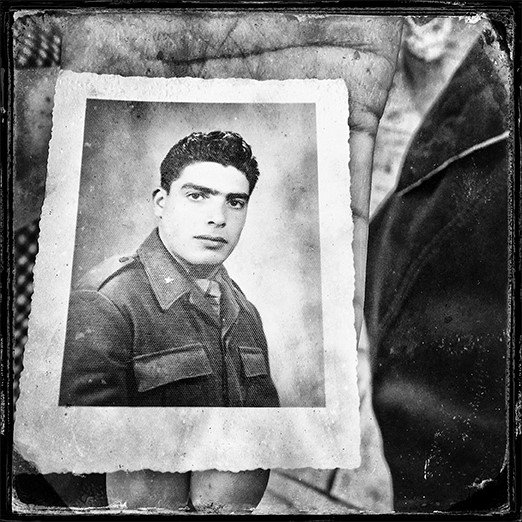 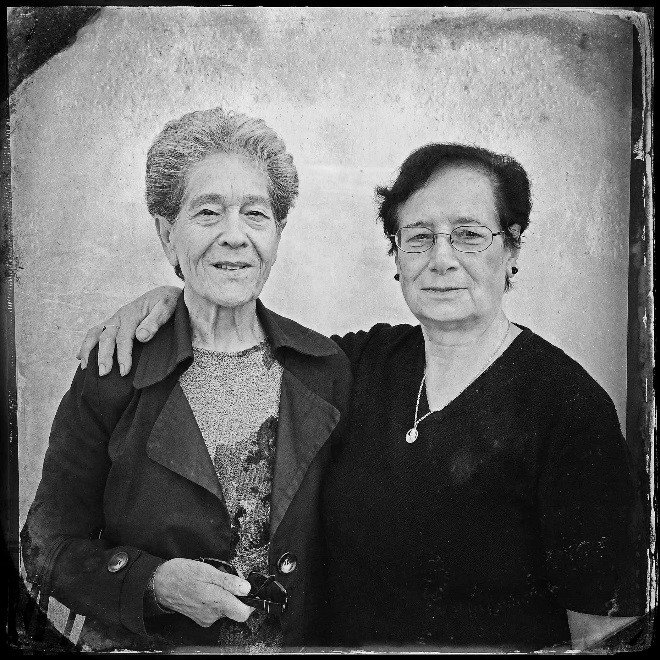 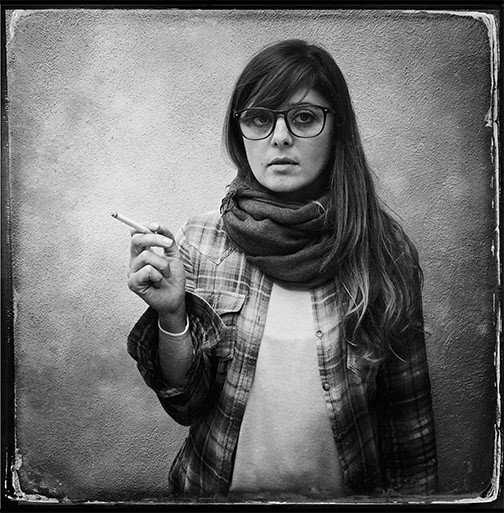 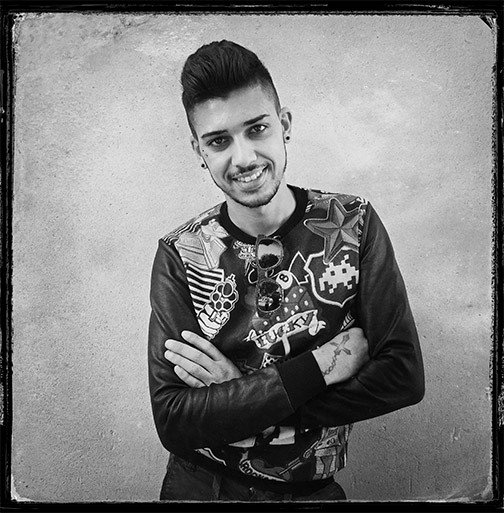 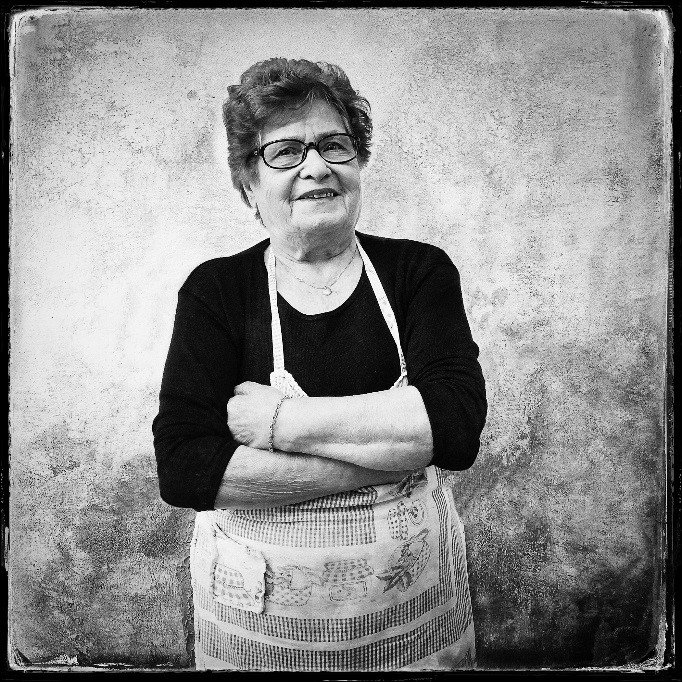 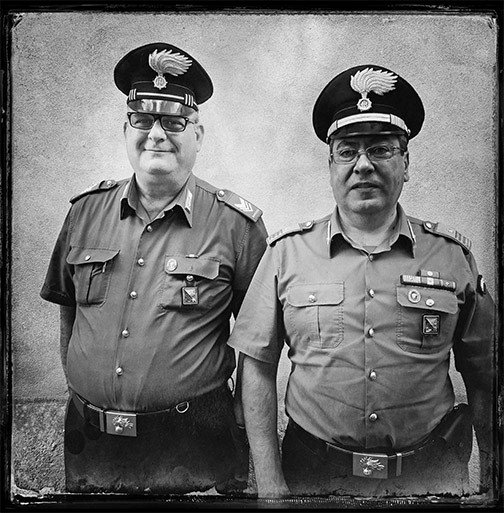 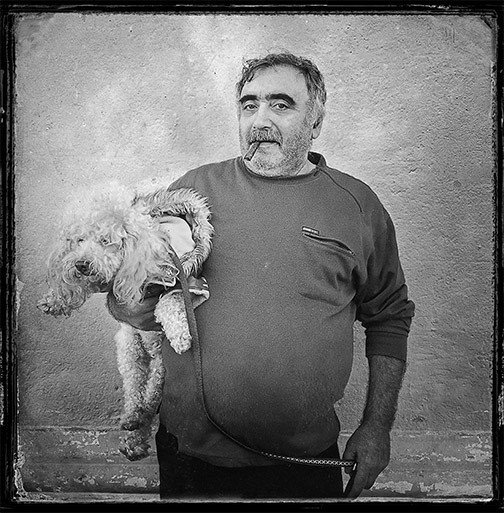 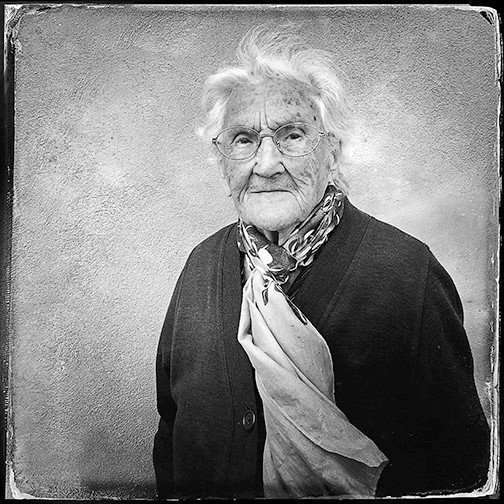 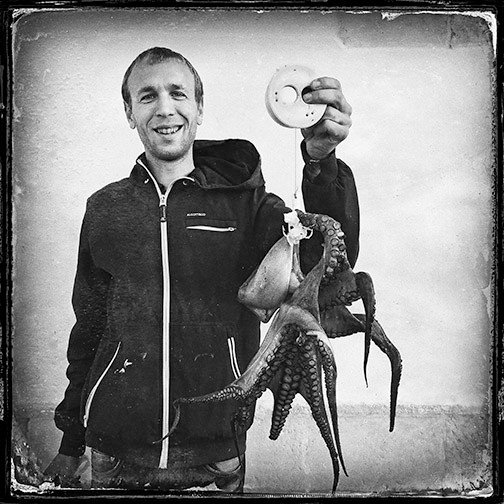 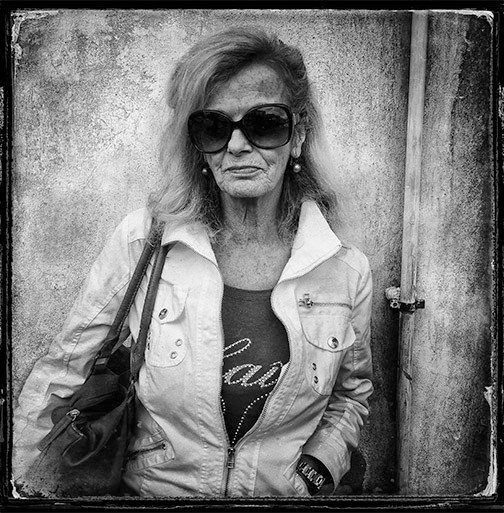